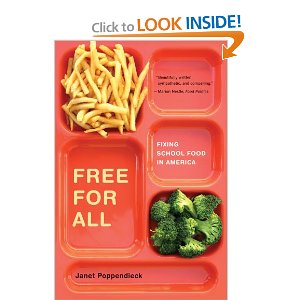 When I was first approached by the School Nutrition Foundation about working on the Partners for Breakfast in the Classroom project, I started by reading Free for All: Fixing School Food in America by Jan Poppendieck. Jan is a sociologist, professor (Hunter College), and author; her faculty biography states: “Her primary concerns, both as a scholar and as an activist, have been poverty, hunger, and food assistance in the United States.” Free for All is a history of school food in America, and views the subject through lenses of politics and public policy, sustainability, nutrition, economics, and much more.

I’ve returned to sections of this book over and over during my research and writing for Beyond Breakfast, and I’m rereading it from start to finish right now. I highly recommend it to anyone who is interested in learning more about the topic of school food.

Jan was kind enough to allow me to interview her by phone. We spoke for over an hour about school food (lunch and breakfast) and issues like nutritional content, food and nutrition education, and the issue of universal food (“free for all”) versus the current three-tier system in school meals. She was incredibly generous with her time and I’m so very grateful.

You can purchase “Free for All” (and Jan’s other book, “Sweet Charity“) online at Amazon.

What problems does universal solve? What barriers do we need to overcome to make universal widespread?

When I first got interested in universal the thing that was concerning me most was the stigma. There are some schools that have found ways around it with things like point-of-sale (POS), swipe card technology, but it still is a major problem in many schools. Children—especially junior high, high school age—are engaged in the formation of their own identities by separating themselves from other people. To give them a basis for wholesale rejection of a group of people on the basis of being “poor” strikes me as very bad social engineering.

The more I studied it [universal] the more I became impressed with the way it drains resources from both the school food operation and the educational project. In many cases the administrative burden that is incurred by schools having to certify—the applications, processing the applications, verification of a sample—it’s costly, it’s expensive. It’s expensive to not feed all of our children as a regular part of the school day. It’s really a very cumbersome and inefficient system.

Also, inaccuracy; the error rates are very high. Not only is this hard to do, but we don’t do it very well. In a way that’s not surprising because schools are not set up to perform means tests. Now, direct certification helps and I’m definitely in favor of using direct certification where we can, but I hate to see a huge investment in direct certification and computer software when we could finance the program in a different way, which is to say universal.

Even when it’s done correctly and there are no errors, there are still a lot of children that are left behind that are not technically or legally eligible for free or reduced lunch, but who are still in need and who still can’t afford the full-price meal. I’m very concerned about the provision in the new legislation that will cause the meal prices to rise; families are really struggling.

Jan on Breakfast in Schools

Welcoming a child to school with a breakfast is a great way to start the day. If you have someone visit your home you don’t say, “Well, tell me what your income is and I’ll tell you whether you have to pay for your refreshments or not.” I realize that schools are not homes, but they are that sort of midway institution; they are the first institution or place where most children go that they’re interacting with strangers, where they’re not the “center of the universe” and I think we want our schools to be as hospitable and welcoming as possible.

I really think school food could be such a wonderful tool for making the school a nurturing environment. Selling food to children really interferes with that. Selling food to children sets the program up to being inadvertently influenced by advertising. Kids are subjected to—what is it, $10 to $12 billion* of advertising a year worth of targeted advertising—almost all of it for sort of unhealthy foods, so they come to school with preferences shaped by what manufacturers want to sell them. To the extent that we’re selling school meals, we have to compete so there is a lot of selling of items on the school food menu that are regarded as “kid-friendly” but aren’t really all that good for kids. I would rather see us feeding the children as a part of the school, integrated with the curriculum without the sort of need to compete. Universal breakfast can’t solve these problems if it has to compete with all that stuff for lunch. Universal breakfast is a great step and I’m certainly in favor of it but I don’t think we should expect it to do the things that I’m claiming that universal meals can do, because it doesn’t eliminate the real sources of the problems.

Where does breakfast fit into this movement for universal food in schools?

I’ve found people very responsive to the idea of universal food, and not nearly as much “You’re crazy, that’s pie-in-the-sky” reaction that I kind of expected.

I think we could do so much better with school food if we weren’t hog-tied by what I kind of think is an absurd system. But let me go back to your question. Universal breakfast, particularly universal breakfast in the classroom, can certainly demonstrate some of the potential of universal meals. First, I think the most commonly reported finding is a reduction in disciplinary referrals in the morning hours; I heard this from every principal in a school that I talked to that had universal breakfast. And this relates to the behavioral improvement when kids have had breakfast—they are less likely to get crabby and irritable when they have had breakfast in the morning. One of my students calls it “hangry”; a kind of combination of “hungry” and “angry”. And universal breakfast really helps with that, so one can imagine then that there is more ability to concentrate on learning if classrooms are less disrupted by disciplinary problems.

In the universal breakfast programs [in-classroom] that I’ve visited, it’s been friendly, calm; it’s a great way to launch the school day. So I think it can demonstrate that power of food as welcome and making a nurturing and convivial atmosphere. But I don’t think it can eliminate the stigma or the administrative burden, or the errors or the children who are left behind when it comes to lunch because they don’t qualify for free or reduced price, or the kids who do qualify for reduced price but don’t have the money to purchase, so I think it’s a wonderful, important step but it doesn’t remove the biggest problems associated with the three-tier system.

What do you think about issues—such as instruction time—that people cite in opposition arguments to universal, in-classroom breakfast?

*Author’s note: This figure was corrected from $25-30 to $10-12 billion, per Jan’s request. She explains: “a figure I obtained from  the IOM book, Preventing Childhood Obesity: Health in the Balance. [ see p. 172]. It has undoubtedly gone up since  it was calculated by their sources, but I do not have a more recent figure.” I apologize for mis-quoting Jan, and thank her for sending in the correction.

**Added at the request of Jan Poppendieck.