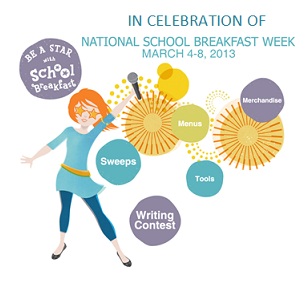 We recently sat down with Amy Dennes, Regional Assistant Superintendent, Jefferson County Public Schools (KY), to discuss what breakfast-in-the-classroom means from an administrative perspective. As we continue to celebrate National School Breakfast Week, we hope you will continue to check back with us here at Beyond Breakfast—and connect with us on Facebook and Twitter—to help spread the word: Breakfast is going to CHANGE the WORLD!

Beyond Breakfast: How did breakfast-in-the-classroom come across your desk, and what got you invested in the program?

Amy Dennes: Last year [prior to a district reorganization] I was the assistant superintendent over all of our 90 elementary schools. The head of our nutrition services, Julia Bauscher, came to me and said, “Hey Amy, I’ve got something that I think is going to be big—it’s going to be so exciting!” Now when Julia says that, I listen, because she’s got a million great ideas and she makes things happen. Julia told me about breakfast-in-the-classroom, and I think what appealed to me most is the opportunity to feed children.

Julia worked up numbers about how many kids in our schools—schools with high percentages of students who qualify for free and reduced lunch—did not eat breakfast every day. We didn’t know why they didn’t eat—maybe they got there late, maybe they ate their breakfast at home—but we knew that there were a lot of kids who were not getting breakfast. Knowing that [with breakfast-in-the-classroom] we could feed every kid in our poorer schools—that was all it took. We’ve seen the research about how kids who eat breakfast do better in school, and it was no-brainer.

We then got talking with some other partners. We worked with our teachers’ union, who has been a great partner; we also worked with our principals group. No one had any issues with it because who can argue with feeding more kids, right? It was an easy decision.

BB: Once you were convinced, what were your next steps?

AD: One of the first things we did was to watch video from other districts that had breakfast-in-the-classroom in place. I had a team of folks, including Julia, and seeing the videos helped us to visualize breakfast-in-the-classroom. Then we started talking to principals. We talked to those principals who had 85 percent or higher free/reduced lunch counts and we called them, showed them the videos, and talked to them about their particular data. We gave these principals the information and let them go back to talk to their staffs, and a number of them volunteered to pilot the project for us.

Julia, her team, and I were meeting with folks and pulling in all of the players—the union folks, the national NEA union folks, the NAESP, and everyone came to the table and was willing to pull together and talk us through any problems we were foreseeing. I have to say, Julia did the bulk of the work—she is just amazing!

It was not a hard sell, and people were ready to roll. Last May NEA and our local union did training. We had schools elect two leaders to come and learn about this from a teacher’s standpoint. We were thinking about the logistics for school foodservice staff, but we needed to see it from the teacher’s perspective. We got teachers together—and the union really helped us out with this—and we walked them through the program, explained how it works, and they got to ask the questions they had, like, “What happens when a kid spills their milk?” —things that are important in the classroom. Those two leaders then went back to their schools and talked to their school staff about breakfast-in-the-classroom.

We knew that having someone on the ground in each school, one of their own, explaining things to their staff was important. One of the real strengths of this program is that it does not look the same in every building; you can customize this to work in your building. Something as simple as the difference between a one-story or two-story building makes a difference in how you roll out breakfast-in-the-classroom.

In the beginning we weren’t sure about when to roll out, but we had schools who were ready, who said, “We want to start!” So we got rolling and we got tons of great comments, and people were really excited about it. After a couple months, I talked to our teachers union’s point person, Liesa Daly. She had gone out to the sites and received some feedback from teachers, and the union had put together a survey to gather that information and it came back with great ideas from the teachers. Things that only teachers, on the front lines, would recognize—like trash bags not being thick enough, so we got them thicker trash bags! Those things make a big difference in a teacher’s life.

BB: How did the process of determining delivery methods proceed?

AD: District nutrition services folks, the lunchroom manager, and the principal consulted on a school-by-school basis to make a plan for each school.

BB: Can you tell us about the reaction and feedback from other stakeholders, like custodians or parents?

AD: Nobody had a big issue with breakfast-in-the-classroom. Sometimes I think folks who work in schools that have high levels of poverty just know that they have kids who have needs, and look for ways to help meet those needs. I didn’t hear any complaints at all. I’ll tell you something that a principal recently told me: He said one of the best things that happens is that when kids get off the bus, they used to come in and it was unstructured—some students in the gym, some in the cafeteria—but now [with breakfast-in-the-classroom] what happens is that the kids come in and immediately they are going right to a learning activity. The kindergarteners and first graders go to the library and someone reads to them; older kids, some go to the gym and work on math, another group goes to work on computers—everyone is going directly to a learning activity. We are extending the learning day for kids, and then everyone goes and eats [breakfast]. Instead of having an unstructured start to the day, we have a learning start to the day and that’s the message throughout the building: you are here for learning. It’s changed the whole feel of the building, and this principal has said that he has fewer referrals in the morning. He’s not sure if it’s because everyone is eating and feels better, or because of the structured learning feeling, but either way it’s improved the atmosphere of the building.

BB: What needs to happen at an administrative level to help make breakfast-in-the-classroom successful?

AD: I think one of the most important things we did was to pull out the data for each school, which shows how many kids were not eating every day. It makes the schools aware of the numbers, and the minute we showed people it made them pause and think about it. I think principals are sometimes hesitant to start another program because they are so busy; giving them the numbers—the reasons “why”—is going to help them see the program benefits.

I also think one thing that helped get people on board with BIC quickly was watching the videos from other districts. Because you can see it and not just read about it, you understand it. You can see what a breakfast cart looks like, what grab-and-go looks like, and you can quickly share this information with other staff members. The videos helped us get the project started quickly.

Also, the relationship with our teachers union was enormously helpful. Liesa Daly, our union rep and point person on this, she is very committed to children, she is easy to talk to, and she’s willing to talk things out. Getting the right folks together to sit down, talk about things, and work things out—those are key. Our partnership with the local teachers union was invaluable.

BB: Any thoughts you want to add, things you want people to know about breakfast-in-the-classroom?

AD: I have two things I want to add. First, is that when you walk into a classroom and everyone is eating together you are building a sense of community and family. There is something about sharing food that brings people together and I don’t think you can downplay that relationship that is built in the classroom—it’s magical! Second, in regard to the future, we had a big media kick off that other schools in the district saw and were inspired by, and so we have several schools that are looking to join breakfast-in-the-classroom mid-year. I think breakfast-in-the-classroom is going to grow, and that it will grow in schools across the country; I highly recommend it!