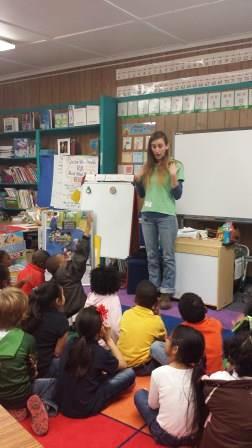 Our first visit to see Recipe for Success Foundation in action was so much fun, we were thrilled to accept an invitation to back and visit a second time! We were fortunate to see several aspects of the program at work on our second visit, including a morning Garden Class with Miss Howard’s first graders, followed by a Culinary Class with Miss Zawacki’s fourth graders that included instruction from one of Houston’s most famous and beloved chefs—Randy Evans of Haven!

Our day started in Miss Howard’s first grade classroom, where Seed-to-Plate instructor Rebecca Verm gathered the students together to talk about their trip to the garden. Rebecca led the students in a quick review of “garden etiquette,” and what their duties in the garden would be. When asked to give examples about what makes a garden grow, hands shot into the air; some of the answers included:

Before heading outside, the kids also discussed seasons, and how what happens outside affects the way plants grow. In the garden, the class was divided into two groups in the garden—one mulching, one watering—and got to work! The kids were clearly having fun, and felt comfortable among the plants, soil, and butterflies. 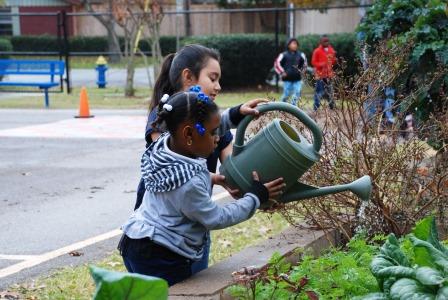 Teamwork on the watering team! 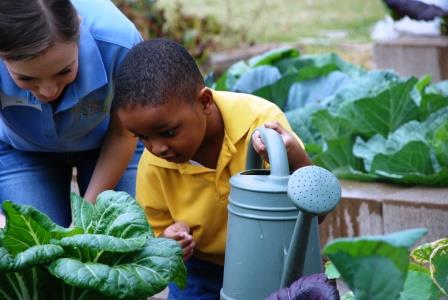 Engaged and invested in his efforts–Recipe For Success is giving kids the needed connection between mind, body, and food. 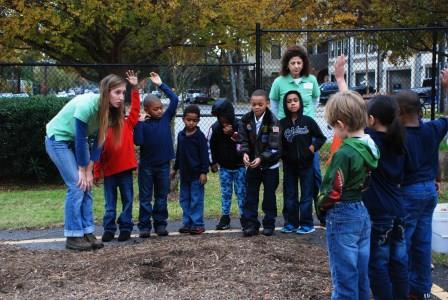 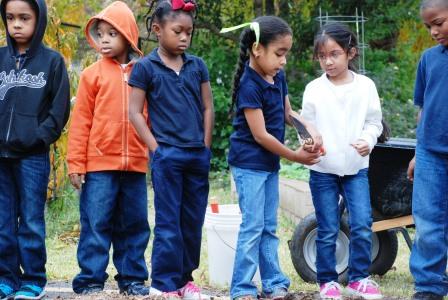 Taking turns and listening–lessons learned in the garden. 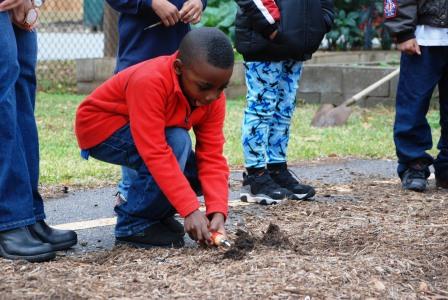 The face of concentration.

After our time in the garden had ended, Miss Howard’s first graders returned to class and we moved on to the Recipe For Success culinary classroom for a morning session—taught by none other than Chef Randy Evans! Chef Evans is well-known in Houston for the ever-changing seasonal menu at his popular restaurant, Haven, where many of the menu items are sourced directly from the restaurant’s own garden. We had a chance to chat briefly with Chef Evans before Miss Zawacki’s fourth graders filed in, and here is what he had to say about his work with Recipe For Success Foundation:

“My garden at the restaurant is based on Recipe for Success. [Founder] Gracie [Cavnar] is a great customer, and she asked me to be on the RFS advisory board. She said, “Trust me” and then she got twenty five chefs on board! The first year in the classroom we [chefs] all had our own recipes. and that’s how we built the curriculum. I love seeing how the kids change, and how they will weigh in and correct if you’re doing something wrong; I love that they are getting an education about food, as well as their palates. Our “tongue lesson” is one of the first ones, and it’s my favorite. It’s how I teach my 6-year-old; the lesson really carried over into my own life. [Through R4S] you get to see these ‘a-ha!’ moments with the kids, and they sometimes extend out to their families as well. Teacher buy-in is crucial for a program like this one—principals and teachers who can see the inherent value. The kids try everything and anything once, and we give them the power to know what their tongues are telling them. I’ve seen this class change, the level of the sophistication of the palates has grown. It’s awesome that Gracie’s little project is now so big, getting national attention and being implemented in other schools around the country. We even sell the cookbook at Haven!” 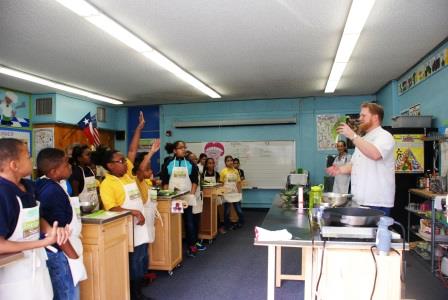 Chef Randy Evans opens up class with a discussion of the ingredients. 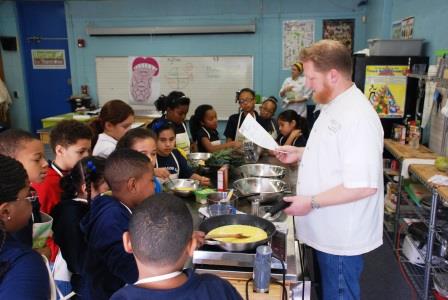 Even chefs have to check the recipe once in a while! 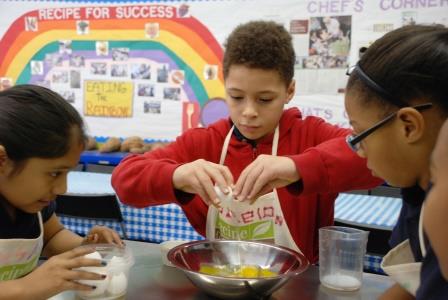 The teams “get cracking” on their scrambles. 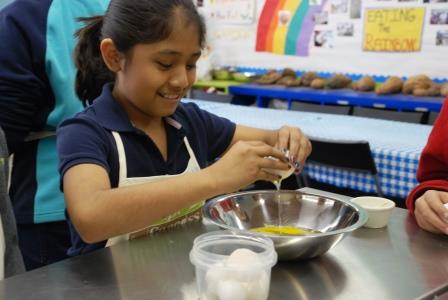 This young lady has “egg-cellent” technique! 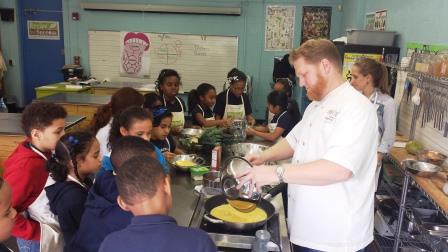 There is no such thing as too many cooks in the kitchen in culinary class!

When Miss Zawacki’s fourth graders came in, Chef Evans got right to work—the recipe of the day was the same Garden Green Scramble that Mrs. Bell’s class had executed on our previous visit, and it smelled—and tasted!—just as delicious the second time around. Many thanks to the Recipe For Success and MacGregor Elementary School staffers who made our visits such fun!

Click to read Part One and Part Two of our Recipe For Success Foundation series; check back to read part four—an extensive interview with RFS founder/powerhouse Gracie Cavnar!

Share:
This entry was posted in local/regional, Recipe for Success, Spotlight. Bookmark the permalink.