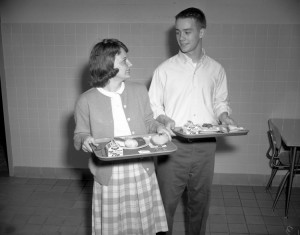 I grew up in the Finger Lakes region of Upstate New York, smack in-between Buffalo and Syracuse. I enjoyed my fair share of snow days and then some. To me “snow days” meant sleeping in and lunches of grilled cheese sandwiches and Campbell’s soup with my mom (a teacher) and my younger brother. My mom used to make three different soups for us: condensed tomato prepared with milk for her, condensed tomato prepared with water for my brother Ben, and a can of ANYTHING BUT TOMATO for me. Sometimes, if we had the ingredients on hand, we’d make English Muffin pizzas. Snow days were cozy; we read books, watched movies, played games. We drank hot chocolate and did homework.

It never occurred to me that other kids in my class were home that day, hungry; that they didn’t have one can of soup, much less three.

As bad weather forces school cancellations across the country I have been thinking about those kids for whom “snow day” means something entirely different; those kids who go hungry on snow days…and on school vacations and during summer vacations. Luckily for these kids, smarter folks than me have been thinking about this already, and the media has been covering it. Read on:

The numbers speak volumes. Look at FRAC’s 2005 numbers on hunger during school vacations and compare them to the 2010 numbers. In 2005 only 19 out of every 100 children who were eligible for free or reduced school lunch (in 2003-04 school year) were taking advantage of the available summer nutrition counterpart, and in 2010 that number dropped to 16.1 out of every 100 (in 2008-09 school year). The title of these reports–“Hunger Doesn’t Take a Vacation”–is not a flippant play on words but a revealing truth about how (and if) kids are eating when school is not in session.

While our nation is trying to recover from a recession, unemployment (and underemployment) is still high and food security remains a serious issue for many families. Children who live in food insecure homes often rely on subsidized school meals to fill in the nutritional gaps. These gaps widen during school holidays and summer vacation and of course, on snow days.

According to this article from AOL on summer hunger only 1.1 million children received free or reduced price summer meals in 2009. Getting the kids enrolled is a “downstream” problem; other barriers occur upstream that make feeding kids in the summer even harder than it is during the school year: federal regulations, nutritional standards, finding and keeping trained staff and a host of other requirements that make coordinating the effort difficult. Then there are problems of infrastructure and deliverability: food storage, perishable vs. non-perishable food, transportation, and waste disposal.

Right now in Houston, school is being canceled in anticipation of 2-5” of snow expected to start in the next few hours, and continue into Friday. While to me (a New Yorker who moved to Texas by way of Fairbanks, Alaska) this doesn’t seem like a lot of snow, in Houston this is a big deal. The city is preparing to shut down. And as I write this blog I have to wonder, how are food insecure families planning on feeding their kids on these extra, unexpected days off? What impact is this weather going to have on the local food pantries?

How do we turn food for thought into food for hungry kids?

2 Responses to Snow Days and Vacations: Food for Thought