Breakfast in the Classroom in Guilford County

Guilford County Schools received a Partners for Breakfast in the Classroom grant during our second funding cycle in the 2012-13 school year. The North Carolina district is home to approximately 77,000 students across 126 schools; at the time the district applied for the grant, breakfast participation was low and school nutrition staff was seeking solutions.

Operations Supervisor Kim Best was there throughout the process, from grant application to program implementation.

“Five years ago we received a Partners for Breakfast in the Classroom grant to pilot the program in twelve schools,” recalled Best. “We chose the schools based on high free/reduced rates—at Smith High School we had been serving maybe ten percent of the students prior to breakfast-in-the-classroom but the free/reduced rate was around 70 percent. At Jackson Middle School, which also had a high free/reduced rate where we were only feeding about 12 percent of the kids. Once we started breakfast-in-the-classroom we were seeing participation around 90 percent.” 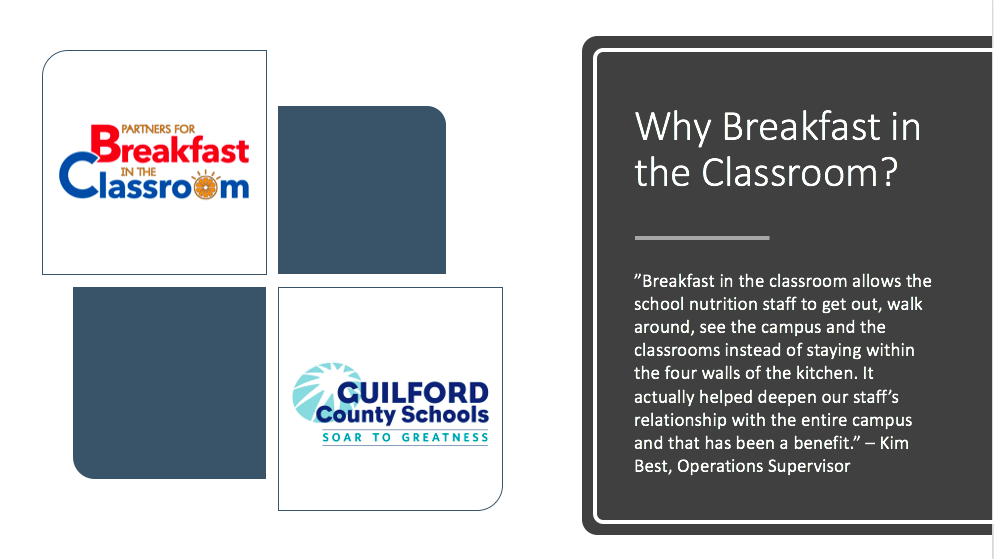 Increasing school breakfast participation was just one of the goals for implementing breakfast-in-the-classroom in Guilford County Schools—school administrators and staff were also hoping to see improvements in behavior issues and low test scores.

“In schools with a lot of poverty you often have behavior issues, suspensions, low test scores,” said Best. “Since breakfast-in-the-classroom those twelve specific schools have all seen an increase in test scores, and behavior improved. There were fewer visits to the nurse, and we saw decreased detention and out-of-school suspensions.”

Good news travels fast, and soon the first twelve principals to sign on for breakfast-in-the-classroom found themselves peppered with questions from colleagues who were interested in BIC for their own school.

“They would get to meetings and people were just asking them all kinds of questions, how they were making [BIC] work,” said Best. “We ended up with a waitlist of principals who wanted the program, and believe me that is not how it started out! We currently have 56 out of 126 schools serving breakfast-in-the-classroom.”

The first year of breakfast-in-the-classroom in Guilford County Schools had some growing pains, but stakeholders came together to work out the kinks.

“There was a lot of learning in terms of equipment, cost, and transportation—you’re moving food around and it can be a challenge,” Best said. “It can be hard to know what kind of equipment would be best for packing and transporting, and some of our campuses are more challenging than others. We had some trial-and-error but we ironed out the wrinkles as we went along.”

Implementing breakfast-in-the-classroom meant planning big changes for many stakeholders, including school nutrition staff. Instead of students filing through the cafeteria line, nutrition staff was out delivering meals, which was more physically demanding. On the other hand, said Best, getting out from behind the line opened up opportunities for her staff.

“Breakfast-in-the-classroom allows the school nutrition staff to get out, walk around, see the campus and the classrooms instead of staying within the four walls of the kitchen. It actually helped deepen our staff’s relationship with the entire campus and that has been a benefit.”

Success starts at the top, and Best says without principal support other stakeholders were reluctant to sign on; once a principal showed interest, they could advocate for the program.

“Principal buy-in is key, and teachers and custodians will follow. The biggest obstacle was that initial fear of having food in the classroom—will there be messes, will there be pests? Then principals talk with teachers about new or added responsibilities, so it’s a process and again it does take some trial-and-error.”

One of the trials and errors involved delivery equipment. The initial plan was to use rolling kiosks to deliver breakfast to the classroom, but they didn’t quite work. Those rolling kiosks are now used as freestanding points of sale (like a concession stand), and breakfast is delivered with hot and cold insulated bags. The bags fit the same amount of food, but the logistics were far more manageable than the rolling kiosks.

“Our purchasing manager Linda Marshburn went out and found the bags, and they are great because in addition to accommodating the same amount of food as the kiosks, the bags also work with offer vs. serve and they are color coded,” said Best.

All teachers receive breakfast-in-the-classroom training; in addition to covering what makes a reimbursable meal, school nutrition staff explain how school meals are funded.

“A lot of teachers think we’re on the same budget so giving that information alone—you can see the light bulb go off!” said Best. “That opens the door, and then we train them on the federal requirements of a reimbursable meal at breakfast. It’s about a ten day learning curve, and we have created a one-page ‘cheat sheet’ that illustrates ‘how-to-make-a-school breakfast.’”

Making breakfast free for all students has also been a profound change, one that had a positive impact on participation.

“I didn’t realize one of the reasons the kids didn’t want to come to the cafeteria was they didn’t want to be labeled a ‘poor’ kid,” recalled Best. “We eliminated that and we brought a fellowship to the classroom. I personally saw a difference in the children and my heart has been in it from the beginning because of the personal stories of how this has changed the lives of these kids. The numbers don’t lie—when you go from feeding ten percent of the population to 90 percent, that’s just incredible.”