Step-by-Step: Bringing Breakfast to the Classroom in DeSoto ISD

DeSoto ISD’s Resident Dietitian Jeffrey Caguioa was convinced breakfast-in-the-classroom would be a good fit for his district, but other stakeholders weren’t so sure. Caguioa set out to change minds, one at a time. During a recent visit to Woodbridge Elementary we met with Caguioa, school nutrition staff, and school stakeholders to learn more about how they are making breakfast-in-the-classroom work in this district of about 10,400 students just outside of Dallas, Texas.

“When we first pitched breakfast-in-the-classroom there was pushback,” said Caguioa. “They had tried the program before and it didn’t take off, so folks were hesitant to try again.” 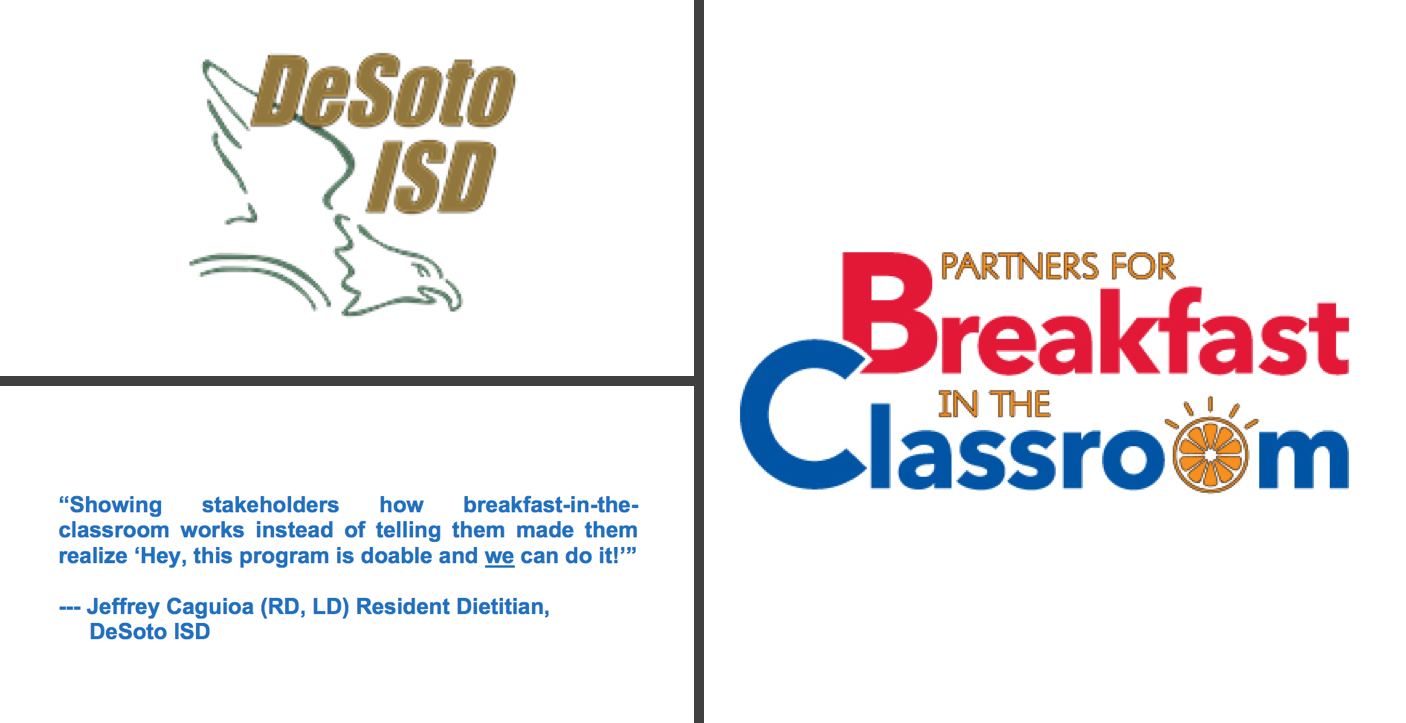 Another thing working against Caguioa were common misperceptions about breakfast-in-the-classroom: it’s messy, brings pests to the classroom, and results in a loss of instructional time. Caguioa addressed these issues by arranging site visits for stakeholders to other districts where they could observe breakfast being served in the classroom. These site visits gave stakeholders the opportunity to visualize the logistics of BIC in action and ask their peers questions.

“Showing stakeholders how the program works instead of telling them made them realize, ‘Hey, this program is doable and we can do it’,” said Caguioa. He secured a small grant from Action for Healthy Kids to start a breakfast-in-the-classroom pilot at one elementary school with an enthusiastic principal. Once that pilot was deemed a success, said Caguioa, it was easy to convince others BIC would be worth the effort.

A Partners for Breakfast in the Classroom grant would help Caguioa expand BIC to other DeSoto ISD campuses. He worked with Partners for BIC consultant Liz Campbell to submit a grant application for funds to allow him to replicate direct delivery BIC, similar to that first pilot program. When we visited DeSoto ISD direct delivery breakfast-in-the-classroom had been running for about two months at Woodbridge Elementary School. Stephanie—Woodbridge’s cafeteria manager—stopped to chat briefly as she passed through the kitchen during breakfast preparations.

“It was definitely a big adjustment, but we have the hang of it now!” said Stephanie who—along with her staff—serves breakfast, lunch, and dinner at Woodbridge, DeSoto’s second-largest campus with about 740 students. “Our main challenges are space and storage, so we’re excited to be getting a walk-in cooler with some of the grant funds. We do three meals and that requires a lot of storage.”

Other changes to the cafeteria staff’s routine included labor changes—some employees had to start coming in at 6 a.m. rather than 8 a.m.—but Stephanie says it’s “just part of the routine” now, and there is no denying the students love it.

This is the first part of a multi-part series on our visit to DeSoto ISD. Don’t forget to follow our friends in DeSoto on Facebook and Twitter, and check back soon for the second part in this ongoing series.

One Response to Step-by-Step: Bringing Breakfast to the Classroom in DeSoto ISD