School Breakfast for the Big Kids: George Wythe High School for the Arts Feeds Creative Minds in the Classroom

In Richmond, Virginia, high school students at George Wythe High School for the Arts (Go Bulldogs!) are getting a fresh start to their school day with grab-n-go breakfast. Thanks to a grant from Partners for Breakfast in the Classroom, George Wythe is among seven schools in the Richmond Public School District rolling out breakfast-in-the-classroom for its students. We recently sat down with Susan Roberson, Director of School Nutrition Services to talk about breakfast-in-the-classroom and why it’s the right fit for Richmond Public Schools.

Roberson—who has been in her current position since 2009—says she had her eye on a breakfast-in-the-classroom program for some time when the opportunity to apply for a Partners for BIC grant presented itself.

“I was seeking out breakfast-in-the-classroom for at least a year before this came across my desk,” explained Roberson by phone from her Richmond office. “We felt that [BIC] would eliminate the problem of long lines at breakfast at some schools, and address the problem of students not engaging in breakfast in favor of social time with their friends—that was especially the case at the middle and high schools.” 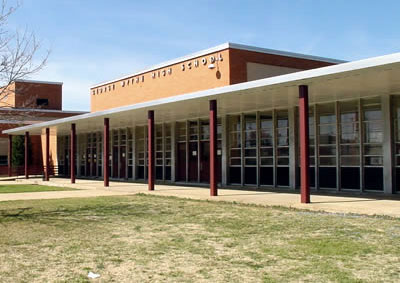 Roberson counted new equipment among her greatest needs in order to roll out a successful breakfast-in-the-classroom program.

“We’re an urban school system and we have the typical problems—old schools with old equipment!” said Susan. “It may sound strange to some people that we needed a walk-in freezer at [George Wythe], but there was no walk-in at that particular school! So that freezer is going to help us store the foods we need and have access to them in a timely manner.” Susan is also looking at purchasing new ovens; not because the current equipment isn’t operating properly, but because it’s so old the ovens take an exceedingly long time to preheat—no good when breakfast has to be ready by 7:10 a.m.

“Quick-firing ovens will help us get breakfast ready for students to eat, because I can’t have people coming in at 4 or 5 in the morning just to get the oven on!” Roberson became aware of the oven issue after asking her manager about biscuit cook time—another example of how collaborating and getting feedback from everyone on your team can help identify and remove barriers.

Richmond is a large district—some 24,000 children make up the student body, which at last count (the district is currently enrolled in CEP) had a free/reduced rate of 77 percent. In addition to George Wythe High School, Richmond has implemented some form of BIC at nine elementary schools and one middle school, with continued plans for program expansion. Moving breakfast from a traditional cafeteria setting to the classroom helped alleviate long lines, and simplified the process for students juggling backpacks and jackets; breakfast-in-the-classroom gave order to chaos.

“In the traditional setting the students come off the bus in one lump, the kids are carrying backpacks and [coats], they don’t know their PIN, and getting them organized in a timely way—it’s hard!” explained Roberson. Moving the meal to the classroom constitutes what Susan called “a better way to do breakfast” because it allows students to get off the bus, pick up their breakfast, put away their belongings, and then sit down quietly to eat at their homeroom desk.

And how did the notoriously-hard-to-impress high school-age students respond to BIC? With enthusiasm!

“It’s going so well at the high school already, and it was such a smooth process,” said Roberson. “In fact, it was so smooth we had to ask ourselves, ‘Why did we wait so long?!’ We’ll be using this as a model for all of our other high schools to see and to show them it can be done.”

Susan Roberson cites George Wythe High School Principal Reva Green’s support as crucial to the success of the program. “You have to have a principal champion, it’s as simple as that,” explained Susan. “Our principal, Reva Green, was so enthusiastic, so organized, and so detail-oriented that she rallied the troops in her building to make sure it was a smooth transition and a success. Once you have that principal on board, the sky is the limit!” Additional support comes from the top in Virginia, where Breakfast After the Bell is a priority for Governor Terry McAuliff and his wife, Dorothy.

“We’ve already had the first lady of Virginia come out and visit us to [observe breakfast],” said Roberson. “She has really gotten behind this program, and this administration has done an amazing job—we are so happy. In five days, George Wythe saw a 31 percent increase in participation, and as time goes on I think we’ll see more gains, and better understand the long-term benefits.”

When we mentioned that we hear the words “no-brainer” frequently applied to BIC, Roberson jumped in to concur. “It’s interesting that you use that word—that’s exactly the word our superintendent Dr. Bedden used,” said Susan. “Breakfast [in-the-classroom] is a no-brainer, and CEP is a no-brainer. Dr. Bedden has also been a wonderful support, and let everyone know that he wants to see breakfast-in-the-classroom everywhere.”

The students are also coming to the conclusion that breakfast-in-the-classroom is a “no-brainer,” and they’ve confessed some surprising benefits that have come with the change to their morning meal.

“When the first lady [of Virginia] was visiting she asked students what they thought of the program, and some of them said that while they missed seeing their friends, they are now making new friends in their classrooms,” explained Roberson. “They are gaining a new side of being social with people in their classroom, as opposed to their friends or cliques that may have been set up in the cafeteria. They don’t feel like they are missing that social time, and they are eating breakfast and getting ready to learn—I think in the long run we’re going to see some really great, really interesting results and benefits we couldn’t have even imagined.”

2 Responses to School Breakfast for the Big Kids: George Wythe High School for the Arts Feeds Creative Minds in the Classroom