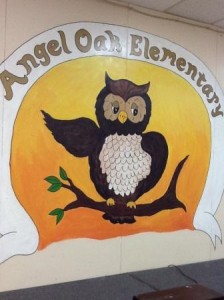 Attending the breakfast in the classroom media events always reminds me just how early breakfast starts. We set out for Angel Oak Elementary at 6 a.m. this morning. The sun was not even thinking of coming up any time soon, just outside of Charleston, SC. We arrived at the school and met up with Walter Campbell, Food Service Director of Charleston County School District and Rodney Moore, Principal. There was a media crew already in the parking lot doing a live feed in anticipation of the breakfast event later in the morning.

The main entrance of the school opens up to an enormous library with a large white owl (the school’s mascot) keeping a watchful eye over the students. Upon closer inspection, the owl turned out to be ceramic but still stood a symbol of learning to the students.

In the kitchen, the food service staff had already prepared the menu items the night before, so it was a matter of heating the mini waffles and putting them in rolling coolers with milk and fruit for delivery to the classroom. Just before the students arrived, we gathered in the library and heard from the people who have been making BIC possible at Angel Oak, and the other 14 schools in Charleston.

Rodney Moore graciously welcomed everyone to Angel Oak and talked about the positive impact BIC is having at his school. Since the program was implemented at the beginning of the school year, there has been an increase in the number of students eating breakfast. On average, over 90% of the students are enjoying breakfast in the classroom. 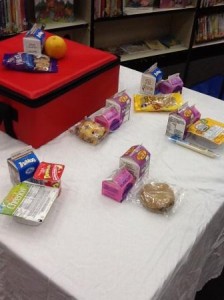 Ruth Taylor, Associate Superintendent, spoke about the positive impacts the program is having on attendance and students’ ability to learn. We also heard from Greg Ley, representing Walmart, who talked about the Walmart Foundation’s commitment to breakfast in the classroom and childhood hunger, and the importance of partnerships to tackle such a big issue. Jonetta Gregory, President of the Charleston County Education Association, emphasized the teamwork among the local stakeholders to make this program so successful. Pat Walker, President and CEO of the Lowcountry Food Bank shared the compelling statistics about child hunger in the Charleston area, and how breakfast-in-the-classroom can make a difference in lives of thousands of children in the area. Molly Spearman from the South Carolina Association of Elementary School Principals spoke of her experiences with breakfast-in-the-classroom and pledged support to share the successes in Charleston with principals across the state and nation.

With speeches complete, we headed to Ms. Condon’s classroom of first- and second-graders to see breakfast in action! The students were quietly sitting at their desks enjoying breakfast. They were totally not impressed with the visitors in their classroom and worked on a lesson. It was great to see Ms. Condon and Ms. Piers enjoying one on one time with the students. They both agreed that breakfast-in-the-classroom is a great way to start the day.

As breakfast came to a close, the trash was neatly bagged up and left outside the classroom door and students rolled the coolers back to the cafeteria. Roster sheets were being entered into the POS system and prepping for lunch has already started.

By that time, the sun has come up and a new day had begun at Angel Oak Elementary.