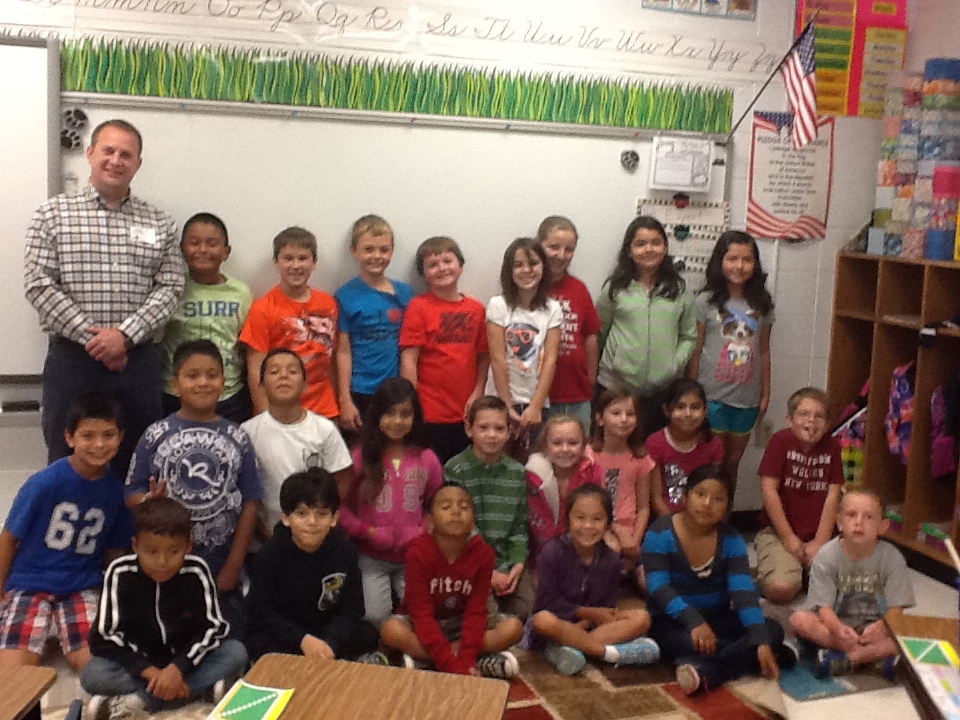 When it comes to breakfast-in-the-classroom, you would be hard-pressed to find a bigger fan than Jason Carter, Assistant Director of Child Nutrition at Rogers Public Schools in Arkansas. After moving from a small district (1800 students) to a much larger district, with over 15,000 students, Jason was charged with implementing breakfast-in-the-classroom after the program had been approved by his predecessor.

“[SNF consultant] Liz Campbell had come in and done the district evaluation, and spoke with our superintendent and administrators, including school nutrition director Margie Bowers; they decided to implement with five pilot schools. The Walmart Foundation is just seven miles from our campus, and we have a close relationship with the entire Walmart world.”

Jason came on board in July, and he was immediately tasked with getting the BIC program up and running. He admits he had reservations about the program. “When you first look at it, it can be overwhelming,” said Carter. “You think, ‘I’m going to feed 500 kids in seven minutes, and they are all going to go to their classroom, and they aren’t going to make a mess, and the teachers and principals are going to love it, and everyone is going to have a great time with it?’ It just seems too good to be true—one of those programs that seems so much better on paper than in practice.”

Since the program was approved by the time Carter got to Rogers Public Schools, he didn’t have to sell the program to anyone—his job was to make it work. “Everyone believed this program is best for the children. I feel fortunate to work with this group of folks—the principals, administrators, teachers, custodians, and foodservice staff. We went in with the right mindset, and everything else was just paperwork.” Working out logistics like where to line up the kids, where to put the trash cans, and how many service points were needed were relatively easy with plenty of buy-in from stakeholders.

That’s not to say that the process is a breeze, said Jason. “Liz has this saying, and I steal it from her all the time: ‘Once you’ve been in one school, you’ve been in one school.’ And that’s because everyone does BIC differently. You have to go into each school individually, and find out how to make it work for that school, those students, that staff.” In some schools students line up in the halls, while in others they queue up in the cafeteria; breakfast-in-the-classroom is customizable, and must be tailored to work for each school to ensure success.

In Carter’s district, the grab-n-go model has proven to be simple and successful. “It’s about efficiency,” explained Carter. “Sending kids to a central location, where they can pick up an easy-to-carry bagged breakfast, and then getting them into their classrooms makes the most sense for us. We’re out there for a half hour at the most, and then we’re back to lunch prep.” By using a limited, two-week menu with items the students love has also helped Carter’s BIC program remain successful.

Not everyone loves breakfast-in-the-classroom at first, but in Carter’s experience the biggest detractors can also become the biggest supporters. “One principal told me that her staff was ready to revolt when she brought BIC to them, and now she says she’d have the same reaction if she tried to take the program away—it’s that popular.” Carter attributes the success to the program to communication—giving everyone a chance to talk about their fears and concerns ahead of time, and addressing those concerns. “Giving folks time to share their fears, and to give them the opportunity to realize that on our part we have thought things through, and then going back and making small adjustments to customize the program for each school—that’s how you bring everyone on board.”

Another key to BIC success is a lot of research, early on in the process, about how much the program will cost. “It’s a great program, but if you can’t afford it it’s not,” said Carter. Choosing products that fit within his budget, and keeping the menu small—but packed with student favorites—are strategies he employs to keep costs down; also, employing offer versus serve at breakfast, to give students the choice whether or not to take fruit, keeps costs down and reduces food waste. It’s also important to carefully calculate labor costs. “The program is fantastic, but if you can’t afford it, it’s going to go in the wrong direction,” advised Jason.

The effects of the program have been profound, says Jason. “Behavior issues, nurse visits, tardies—they went down,” said Jason. “We sold a program that lived up to the promise, and that’s not necessarily common. The goal is to make it minimally invasive—for teachers, for staff—and I think we accomplished that.” The students love the program, so much so that one class invited Jason to sit down and have breakfast-in-the-classroom with them. “We talked about the program, about Walmart’s involvement in funding and providing this opportunity,” said Jason of his morning meal. “Mostly they just wanted to ask me about my family, my kids—and whether I was Captain America! (It was a good ego boost.) One of the selling points of BIC is that community time with class, and that was the focus—we chose to get to know one another. It was a great experience.”

“I joke about it. I often say it’s the kids who are easy to train—but we adults? We have trouble with the change. Everything kids do is change—learning, improving—but as adults we get to a point where we don’t want to change, we’re comfortable where we’re at. Breakfast-in-the-classroom is one of those programs where we didn’t mind being uncomfortable for a while, because we could see how much benefit it brought to the students.”