Michael Clark, SNS, is the Director of School Nutrition for Crane Elementary District #13 in Yuma, Arizona. You can connect with CED #13 online on Facebook, LinkedIn, YouTube, and Twitter. Michael Clark received several SNF scholarships which helped him finish his degree while working his full-time school nutrition job.

Sometimes people look at Michael Clark a little funny when he describes himself as a “lunch lady” but according to Clark it’s a great way to make a first impression.

“There aren’t a lot of men in school nutrition,” he laughed. “So when people ask and I say, ‘I’m a lunch lady,’ everyone laughs—but they always remember me.”

Like many school nutrition professionals, Clark’s route to the cafeteria wasn’t an entirely straight line. Breaking with tradition (he comes from a long line of contractors and craftsmen) Clark went into foodservice—restaurants, then care facilities and retirement homes. When his wife saw an ad in the paper for a school foodservice job, the family-friendly hours appealed to Clark and he applied.

“Working in schools was a good fit, and I thought it would provide a better long-term future,” recalls Clark, who began his career as a cook at a Mesa, Arizona high school in 1996. It was there that his passion for school foodservice took hold, and Clark soon moved up the ranks.

“After I had been a cook for a few years, I was offered the opportunity to become a secondary manager. It was at that point that I began to appreciate the value of [SNA], which at the time was ASFSA,” said Clark. “I began to realize what a valuable resource SNA could be, and I started looking for opportunities to learn.”

Michael decided to redouble his focus, setting long-term goals that would allow him to stay in school foodservice and establish a thriving career.

“Deciding to get more serious about credentialing through SNA was about legitimizing what I was doing; not for myself, but so I could show people, ‘This is how I know what I know’,” he recalled. “My first goal was to go back [to college] for the couple of classes I needed to become Level 1 certified. Then I worked until I became Level 3 certified. At that point I set a goal to become SNS credentialed, and I had to get a little more serious about college courses.”

After he accrued enough credits, Clark took the SNS credentialing exam, in July of 2009. He didn’t pass on his first try, but was undeterred; he took the exam for a second time in September 2009 and passed.

“That’s one of my proudest achievements,” said Clark. “I didn’t really understand what that credential really meant at the time. It wasn’t until I achieved higher levels of management and began to interact more on a national level that I realized the impact of that SNS credential, what it means to other people.”

After passing his credentialing exam Clark realized he was as close to completing his bachelor’s degree as he had ever been, which prompted him to make a new goal.

“With that visible end in sight, I laid down some personal goals,” he recalled. “Another one of my proudest moments was earning my bachelor’s degree in Science & Nutrition Management from Arizona State University. I finished in December 2013.”

Going back to school as an adult certainly presents unique challenges, like finding money to pay for school and time to dedicate to schoolwork. Clark credits his wife for holding down the fort with their kids and working part-time, as well as SNF scholarships, for alleviating those pressures—so much so that he actually outperformed his post-high school attempt at college. 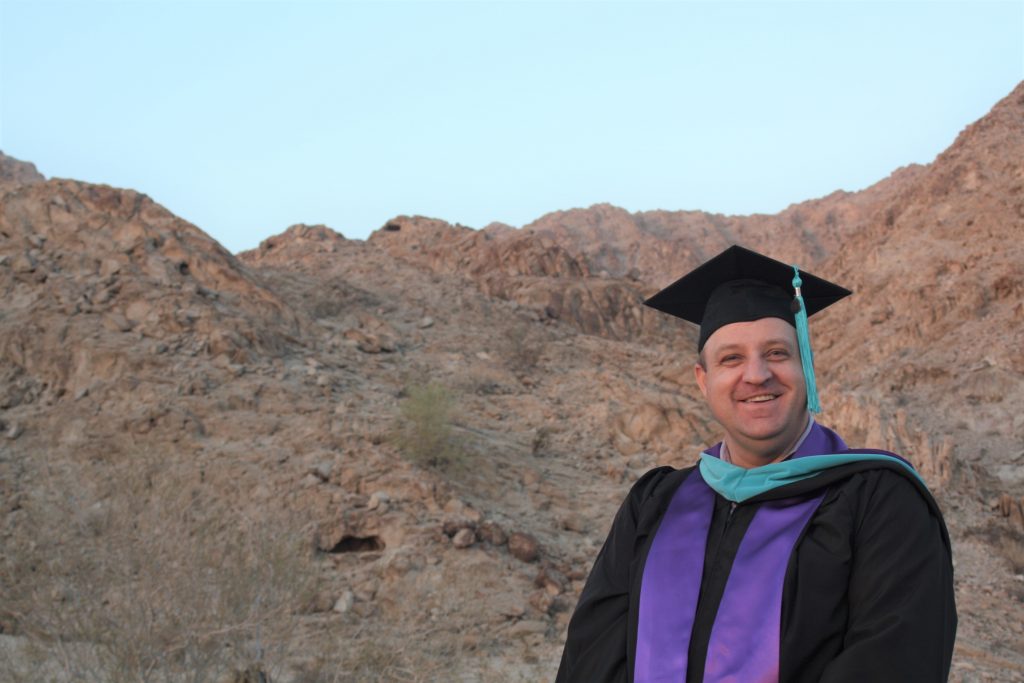 Now in his first year as a school nutrition director, Clark encourages all SNA members to take advantage of SNA resources, and to cultivate opportunities for personal and professional growth.

“You don’t have to be as ambitious as I was, but that time passes whether you’re in classes or not,” advised Clark. “Do what you can commit to! Whether you’re in class or not, everything moves forward. If you’re chipping away, you’re making progress, and it will make you a more valuable employee and leader in the future.”