More kids are eating school breakfast than ever before according to our partners at the Food Research & Action Center. FRAC’s latest School Breakfast Scorecard report was released earlier this week, along with their annual School Breakfast: Making it Work in Large School Districts report. Let’s take a closer look at the state of school breakfast across the country. 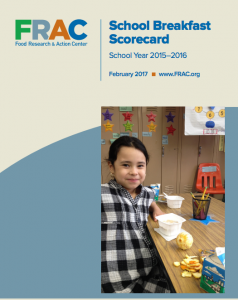 Compared to SY 2014-15, the School Breakfast Scorecard for SY 2015-16 shows a 3.7 percent increase in students who receive a free or reduced price school breakfast—an average of 12.1 million per day. That’s an additional 433,000 kids participating in the morning meal from the previous year.

So, what’s driving increased participation in the SBP? A combination of factors, according to the report’s findings, including offering universal breakfast at no cost to all students and state legislation to expand the use of breakfast after the bell/breakfast-in-the-classroom programs. More schools are taking part in the Community Eligibility Provision program, which is helping them serve school breakfast (and school lunch) at no cost to students.

West Virginia came in first for the third year in a row, serving breakfast to 83.9 low-income children for every 100 who ate school lunch, while Nevada showed the largest increase over last year, growing their SBP participation by 26.5 percent. While there has been a great deal of progress in increasing breakfast participation, there is still room for improvement. If all states met FRAC’s goal of reaching 70 low-income children at breakfast for every 100 at school lunch, an additional 3 million students would have access to a healthy breakfast, and schools would have access to an additional $836 million in federal reimbursements. 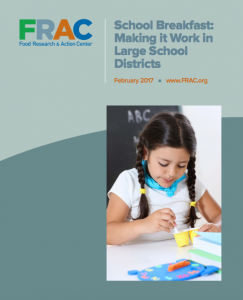 FRAC’s Large District Report surveys 73 of the largest school district in America  to examine participation rates and trends in school breakfast. A few highlights include:

“I went to my superintendent [about CEP] and she said, ‘I want that—I want to feed my babies’,” recalled Hagar. “My catch is this: If the person sitting next to me is eating breakfast that makes me want to eat breakfast; my cafeterias weren’t going to hold everyone. I knew that an increase in participation would mean moving [breakfast] to the classroom.”

After crunching numbers for months, Hagar figured out that without an increase in participation she stood to lose about a million dollars in revenue. Since her program was in the black, Hagar figured she could sustain the program even if she broke even at the end of the year.

“What really happened was our participation increased to the point that I didn’t lose a million [dollars], I gained a million dollars,” said Hagar.

As for the Partners for Breakfast in the Classroom grant, that helped Fort Wayne purchase a new delivery truck needed to move the increased volume of food from the district’s central kitchen out to satellite schools. Working with FRAC, Hagar said she “didn’t want to be greedy” when requesting funds, and “nearly fell off her chair” when she realized a $250,000 ask for a new delivery truck was not out of the question.

Hagar rolled out BIC in all of her elementary schools at once, and piloted the program at the middle school with the most supportive principal first, to model the program for other schools. With top-down support from the superintendent, and a positive PR campaign from the pilot school principal, BIC was implemented in the remaining middle schools shortly after.

Schools and districts in Idaho, Louisiana, Mississippi, Missouri, North Carolina, Nebraska, Ohio, Oklahoma, Texas, and Utah can apply NOW for breakfast-in-the-classroom grant money to cover the upfront costs often associated with the startup and implementation of breakfast in the classroom and “grab n’ go” programs, such as purchasing equipment, outreach efforts to parents, program promotion, and other related expenses. Contact the Partners for Breakfast in the Classroom to learn more and apply for funds!