If you’re following the Partners for Breakfast in the Classroom on Facebook (you are, aren’t you?!) you probably saw us share the Metz Culinary Management blog post about our recent media event in Erie, Pennsylvania, celebrating the expansion of breakfast-in-the-classroom to thirteen of Erie’s Public Schools.

Earlier in 2015 we sat down to chat with Jenny Johns, Assistant Foodservice Director with Metz; Johns spearheaded the effort to bring BIC to her students, and now that she has expanded the program into thirteen schools we wanted to know how the school year was going, and hear some of the highlights from the media event.

“We’re so excited because now all of the schools we had originally planned [to participate in BIC] are officially in the program,” said Jenny by phone. “We now have thirteen schools doing breakfast-in-the-classroom—a mix of K-8, K-5, and one [grade] 6-8 building.” 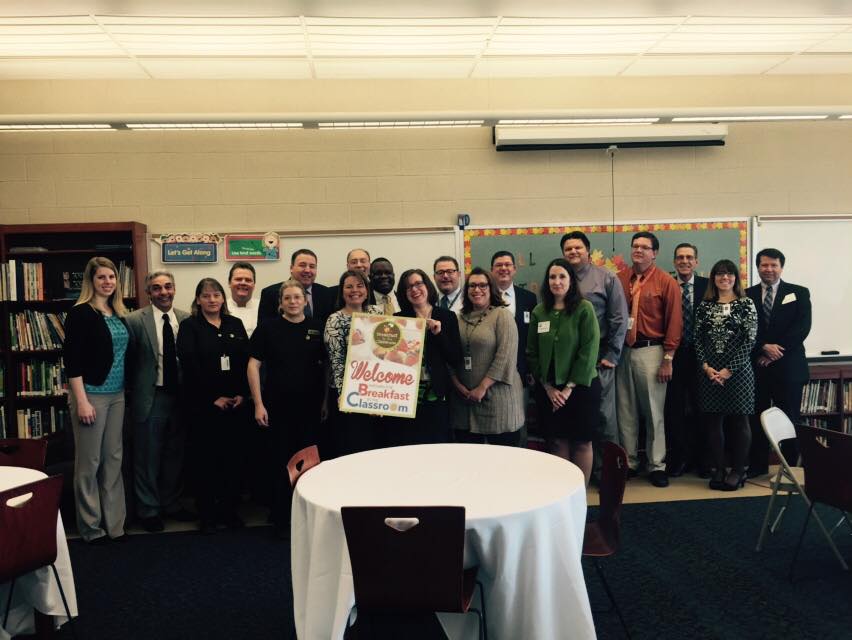 Although funding certainly made the process of implementation easier, it didn’t necessarily make the program an easy sell with every stakeholder. After the first wave of volunteer principals—those who offered to ‘go first’ with implementation—Johns had to set her sights on some of the more resistant individuals who weren’t quite as excited about the program. She was gratified when one by one, the principals said ‘yes’—and then became huge fans of BIC.

“Our last three schools just started on September 8, so it’s new to them, but of the ten schools that implemented [previously], every principal indicated that they absolutely loved the program and would recommend it to others,” said Johns. By surveying the principals at the end of the school year, Johns was able to gauge their response to the program and she plans to use her survey results (from principals, and teachers) to help tailor the program going forward.

As the implementation process moved forward, principals that had previously not been interested began warming up to the idea. Eventually she convinced all thirteen principals to participate—an ambitious goal she set at the outset, but one that Jenny privately thought she might not achieve.

“Certainly the high points were actually getting all the schools on board! I had that as a goal but in my mind I thought maybe thirteen was unattainable,” recollected Jenny. “So that in itself was phenomenal. One principal expressed that he didn’t understand [BIC], he didn’t think breakfast was broken, but after day one that principal was high-fiving me in the hallway. He was not at all interested, and then became a total convert.”

Today Jenny’s principals talk about how BIC has helped reduce visits to the nurse’s office, quiet the hallways, and even fewer opportunities for conflict now that students aren’t congregating in the cafeteria.

“Before, all ages came in for breakfast, and there was always a chance for problems to stir, and when it did, it carried into the classroom,” said Johns. “One of the principals said that now the mornings start with calm, with quiet; it’s peaceful, the kids have a routine, and it’s a family-like setting.”

We often hear from stakeholders that breakfast-in-the-classroom has unintended or unanticipated positive outcomes, and Jenny shared an interesting one with us that a principal recently passed on to her.

“The principal at our 6-8 middle school said that breakfast-in-the-classroom has improved safety and management of the building. Now that all of the kids are in the classroom, it’s easier and more cost-effective to supervise them. That same principal also mentioned that in addition to saving the parents some money, the kids who used to come in for breakfast [in the cafeteria] no get to sleep a little longer at home because breakfast is served [in the classroom] now.”

Naturally there were other challenges to overcome—like storing and moving a semi-load of cereal every ten days!—but Jenny says that the program runs well as she continues to make tweaks to perfect the daily routine.

“The storage and handling of the cereal—I didn’t visualize what 60,000 breakfasts would look like! I thought of coolers, racks, carts, and bags—but storage, and equipment like a pallet jack for lifting—it’s a good problem to have, but it’s a problem!”

Going forward Johns hopes to enhance the program by adding menu items, and through fine-tuning to help teachers have the smoothest possible experience during BIC service. Adding nutrition education and increasing participation are also on Jenny’s list of goals. She credits the program’s success to strong stakeholder support and good communication within her district.

“I never in a million years thought my principals would be so supportive. One principal told me, ‘Jenny when they don’t eat they are hungry, they are angry, and they are agitated.’ And that’s it, right? The kids have to be ready to learn, and breakfast is an important part of that.”