While we were away at ANC 2013 in Kansas City, Fuel Up to Play 60 was celebrating their Student Ambassadors and Program Advisors at the 2013 Fuel Up to Play 60 Ambassador Summit. Held in Charlotte, NC from July 11-15, the summit gathered sixty-seven Student Ambassadors and fifty Program Advisors from across the country to participate in fun team-building exercises, leadership activities, and brainstorming sessions on how to keep their schools active and healthy places to be.

Events kicked off at the Bank of America Stadium, which is the home of the Carolina Panthers. Attendees heard from dairy farmers via a keynote address by Eugene Blackwell, a dairy farmer from North Carolina who spoke to ambassadors and program advisors about the importance of the Fuel Up to Play 60 program; Blackwell asked students to continue their work promoting FUTP60. Attendees also heard from board member Zach Meyers, who encouraged kids to use passion to drive change through the FUTP60 program. The crowd then heard from Carolina Panthers’ President Danny Morrison, and Panthers tight end Ben Harstock. 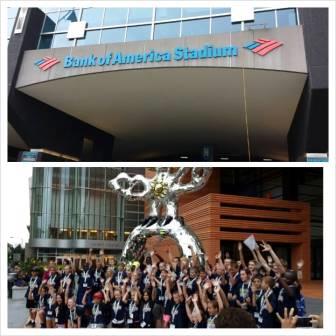 In between workshops and physical activity sessions, ambassadors and program advisors brainstormed improvements to school breakfast menus, developed school action plans, and participated in the “Make Your Own Meme” Contest on the Fuel Up to Play 60 Facebook page. Connect with FUTP60 on Facebook, and on Twitter!

Other highlights from the conference include: